The Science behind Turblown Engineering’s 13B Rotary Engine Stud kits

Engine fasteners are often mis understood, especially in the rotary community. This article will examine the differences between bolts & studs, the build process, design and engineering behind the Turblown 13B stud kits.

The biggest difference between bolts and studs are how precise one is able to torque them. A bolt applies friction at both the head, and threads. The oem bolts are twisting at both the front and rear iron. Studs do not apply any friction at the threads in the front iron. These threads are stretched in a static position. The only friction is seen at rear iron, between the stud’s thread, and the nuts while torquing.  The studs produce less friction while being torqued compared to the OEM bolts & other competitors fasteners. Why does the amount of friction matter? More friction skews the torque readings. Inaccurate torque readings mean less clamping force is applied, and unequal clamping force from fasteners to fastener.  The threads in the Turblown 13B stud kits are hot rolled, and not cut. This again produces less friction. 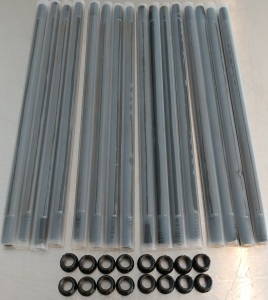 Now that we have an overall idea of why studs are better than bolts, lets cover the construction of the Turblown 13B studs.  Not all studs are created equal, and how they are constructed makes a big difference.  All of these studs are aged & hardened by heat treating. This can be from anywhere between 1 and 8 hours depending upon the material selected & done in vertical racks to assure complete penetration( not just batch treated in large bins). Afterwards the studs are shot-peened to deburr, and clean them from heat treat. If the parts aren’t cleaned properly they cannot be machined accurately. Next up is the center less grinding. The original bar stock is not perfectly straight both before and after being cold formed. Heat treating often warps the material too. The center less grinding makes the studs perfectly concentric. This takes up to 10 machining steps!

As mentioned earlier the threads are not just cut on these studs, they are hot rolled. This is an extrusion process that forces the material between two dies to form the threaded portion of the stud. Competitors often just cut their threads on lathe. Rolled threads are stronger, more consistent and smoother( less friction). This is done after heat treating and not prior, which makes them up to 10X stronger.

Having a superior constructed stud is only half the battle. One needs to have proper test data in order to know how much clamping force is applied. Believe it or not, just having a higher tensile strength stud does not mean it applies more clamping force at every torque interval. In fact it could be LESS than the OEM bolts! Both used, brand new OEM, and several different stud designs were tested at many torque intervals all the way up to their yield values. Testing the OEM bolts gave a good indication of what the OEM units provide in terms of clamping force per OEM power level. There is a 1500 ft lb difference in applied torque between the OEM S4 T2 bolts and the OEM S6 bolts. There is a 95HP difference in power between the two engines & a higher rev limit on the S6 engine. Mazda determined that clamping force should go up with an increased power level and rev limit. We also know through real world testing that the 13B engine expands with high power levels. This was measured on an engine dyno with a strain gauge( both OEM S6 bolts & 10mm studs).

Turblown Engineering now has a calculated spread sheet for applied clamping force, and a recommendation for your power goals.

After 10 years of using different places to perform each of the above tasks, these are now being manufactured by ARP for Turblown Engineering all under one roof. ARP was chosen to manufacture these studs because of their ultra strict quality control. Not only do they use some of the most advanced machines and tooling, but they also have dedicated quality control inspectors for each process, and the end products. ARP is ISO9001 and the AS9100 quality standards certified to prove it. These studs are by far the best that money can buy for your 13B mazda rotary.

You can purchase your set here on our online store.