BorgWarner EFR turbochargers are living up to the hype

The BorgWarner EFR turbochargers have been hyped up pretty good for the past 2 to 3 years. Results never really poured in, as there were casting problems, and many production delays. Furthermore not to many people wanted to 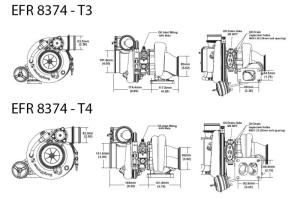 risk trying out some of the most expensive turbochargers that money can buy. Most turbo systems could not simply accommodate the unit as a direct swap anyhow, especially the IWG units that measure roughly 6″ inches longer!

We’ve all read about the WTAC and how most of the winners used EFR models, and how over half the top finishers in the Sebring 12 hour used EFR models too. These results don’t really tell you what if anything these turbos will do for you. Furthermore no one has really seen any data for the rotary engines, until now.

Recently the guys at ForceFed Racing did a direct turbo swap with zero other changes on one of their mechanic’s cars. The results were amazing! Swapping from a standard Airwerks S366 T4 .91 to a EFR 9180 resulted in a boost threshold that was reached 900rpms faster, and almost a 50rwhp gain!

Recently Turblown Engineering‘s new FD3S EFR IWG turbo system was put to to the test. The owner, Jacob Cartmill, previously had a Precision 6262 turbo system, including Turblown’s standard FD3S twinscroll turbo manifold, and a 3″ downpipe with dual rerouted Tial MVS wastegates. This system put down a conservative 340rwhp @ 12psi on a medium streetport with a Vmount on pump gas. The turbo didn’t make full boost til a tick past 4600rpms on a dyno dynamics dyno. 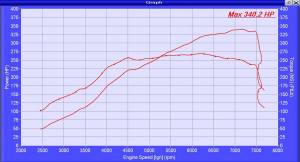 Now fast forward to EFR. The only changes to the car were the installation of the  EFR IWG 8374, and shorter turbo manifold.

The same boost pressure of 12psi, same dyno brand, same tuner, etc were used. Note there was no difference in peak HP( both use billet compressor wheels of roughly the same size and similar design; 62/82mm on the PTE, and 62/83 on the BW).  However if you look at the power under the curve and boost response you can see there is a huge difference. The BW hits full boost roughly 1500rpms faster! As you can see this also translates into a much wider powerband. The PTE system made roughly 140 ft lbs of torque at 3000rpms, while the BW system made roughly 240ft lbs!  Now to be fair there are some differences between the two; the PTE system uses a journal bearing system, and the EFR is ball bearing. However the EFR’s turbine wheel is substantially larger, which would more than negate the chra difference in our experience. Furthermore you can rarely see the difference in CHRA design doing 4th gear dyno pulls. The PTE uses a 62mm turbine wheel( .84 housing) and a BW uses a 65mm turbine wheel in a ( .92 housing). Again the BW has a larger a/r which would also hurt “spool”.  Generally  you see a 150 rpm difference( assuming same turbine wheel, no other changes) between a .84 and 1.0 for example on a 2 rotor 13B. The EFR also has a slighter larger compressor exducer & compressor housing, which should result in slightly slower spool too.

So why does it spool so much faster? Here is a quote from BW about their turbine wheels; “ All EFR turbine wheels are made from a high performance lightweight material known as “Gamma-Ti”. This material innovation is not quite metal and not quite ceramic, it is considered an “inter-metallic compound”. Comprised primarily of titanium and aluminum (titanium-aluminide) with other trace elements, the Gamma-Ti turbine wheel is so light it’s nearly the same weight as the forged-machined aluminum compressor wheel. This approximate 1:1 turbine:compressor weight ratio dramatically improves turbo response. Further strength benefits are realized at high temperatures as Gamma-Ti gains ductility and exhibits very high stiffness-to-weight ratios with good vibration damping characteristics. The EFR debut marks the first time Gamma-Ti has been offered to the public across a range of turbine wheel sizes and at an enthusiast’s price point. EFR Gamma-Ti Turbine wheels utilize the latest generation Fullback/Superback turbine wheel blade aero designs specifically tailored for high turbine efficiency and high flow at elevated boost levels. The fullback wheel hubs employ a full aerodynamic back-disk, meaning that the hubline extends all the way to the inlet tip. This feature allows for incredibly smooth (low energy loss) guidance of exhaust flow out of the housing and into the blade channels. Going one step further, the Superback shape adds a curved profile to the backdisk and effectively lowers centrifugal stresses – improving stability at elevated rotational speeds. Impossible in the past due to material stress limitations, the combination of Gamma-Ti and the exciting new .fullback/superback. design works in concert to allow best possible efficiency, high speed capability and durability. ” And a little excerpt about their CHRA design; “All EFR turbochargers use high-end Ceramic Ball Bearings for Enhanced Turbo Response — Even though BorgWarner has been known as a long-time manufacturer of high end journal bearing turbos, the engineering team developed ceramic ball bearing cartridges for the uncompromising EFR series. EFR bearing cartridges house dual-row ceramic balls in special alloy bearing races to provide substantial friction reduction. The biggest benefits of ball bearings are most clearly realized at low turbo shaft speeds (spool-up region) and they also help improve turbocharger response/boost recovery as found between gear shifts. Once the engine is at full boost, ball bearings offer no advantage in performance – BUT – there are huge performance benefits for getting up to the desired boost level FAST and delivering quick throttle response for on-off-on-off aggressive driving. From a durability standpoint, the EFR cartridge bearing system provides a huge increase in thrust load capacity over conventional systems and requires much less oil supply. From a fuel efficiency standpoint, parasitic loss is reduced at low turbo speed so MPG increases can be realized. Lastly, the EFR bearing system includes the latest in turbo seal technology reducing oil seepage/burning problems often found in aftermarket installations.”

Ric from RicShaw Racing swapped a 8374 EFR 1.05 T4 external turbo onto his previously TO4Z powered endurance Rx-7 and saw a huge gain in boost response too. Nothing changed, but the turbo. However these results compare a 66mm compressor inducer(To4Z) to  61mm compressor inducer(EFR) . One should see a big drop( usually 100 rpms per 1 mm on the compressor inducer). Both turbos are ball bearing.

Stay tuned as 3 more cars are scheduled to dyno at Turblown Engineering, including multiple combinations ranging from 22 to 30psi. The other two models that will work well on  rotary engine; 7670 and 9180 will be tested too!