Rob’s new 4 rotor build is absolutely out of this world, and what we believe to be one of the biggest Rx7 builds in history. What exactly makes this build so special? First and foremost it is all wheel drive. This has only been done once before, but never with a 4 rotor engine. The 4 rotor itself is a super rare motor, of which only double digits have ever been built. The billet cantilever front, and soon to be rear suspension is probably a world’s first for an Rx7. 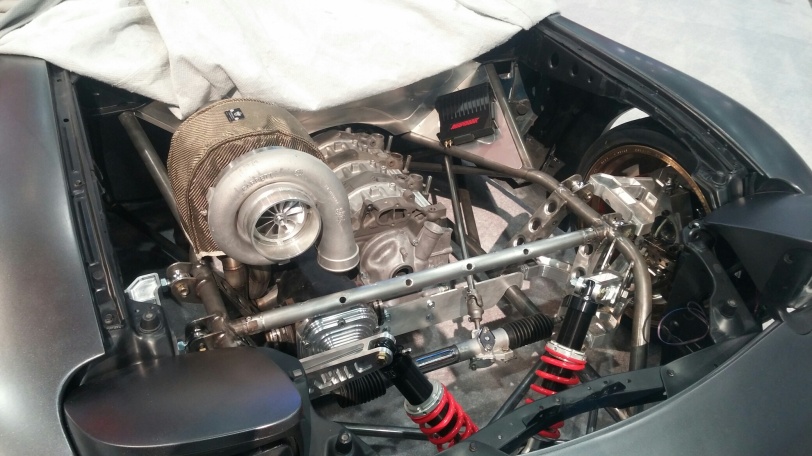 The intended use of this Rx7 is what really completes the picture as the world’s largest Rx7 build. After the projected build completion date of next March, the car is going into wind tunnel testing. The aero will be refined to match the 250mph gearing. One of the car’s goals is to claim the Mazda Land Speed Record of 238MPH.  The car is also going to be raced at Pike’s Peak, and go head to head with the turbo Lamborghinis and GTRs at the ½ mile, and standing mile events. For fun it is also going to go down the ¼ mile, and do some circuit racing and drifting. Lastly it is also going to be street driven and do events such as the Gumball Rally.

Why did Rob choose Adaptronic Modular ECU   for this build? The answer is pretty simple. Rob needs people on this project that are care about it and are committed to following through with completion. With this level of a build, and the goals set for it, its going to take a lot of work, and dedication to finish it properly. We have all agreed to this.

The car is already back from SEMA at Abel Ibarra’s shop; FR Performance.  Machine work on the engine will restart, including a one off set of engine studs, and the machining of the billet semi pport intake manifold. Fabrication will resume including adding the single 60mm waste gate, completion of the exhaust system, and 2 piece front driveshaft, etc. The Adaptronic M6000 Modular ecu’s engine and chassis wiring harness will start shortly. The ECU is being wired to not only control the 4 rotor, but the pneumatic Hollinger DB6 sequential transmission. The transmission will be paddle shifted. The ECU is also being wired to a Motec dash, all 4 wheel speed sensors and a host of other sensors including twin staged DBW throttle bodies.

Stay tuned as we update the blog with the build progress on project Ahura!